Meet the makers below! The Fall 2019 issue of MIT Spectrum magazine profiled a handful of MIT makers and the larger making culture at MIT.

An architecture major and design fellow in the MIT Office of Sustainability, Effie Jia is making the sign for a new campus garden. “Making to me is being able to take my ideas as a visual thinker and transform them into tangible, useful products that are beautiful as well,” she says.

In one MIT design studio, for example, she worked with Tumi to prototype a new design for luggage. “That was one of the coolest experiences,” she says, adding that making things has been an invaluable part of her time at MIT. “I like to be self-sufficient and to be able to look at something and say, ‘I know how to make that’—that’s a really cool mind- set to have.”

Juan Carlos Garcia is in the Music Technology Lab working with others on ConcertCue, an application that streams program notes to audience members during concerts.

"Classical music is dying in popularity, especially among younger people. This is a way to make a more interactive experience,” he says. A double major in computer science and music, Garcia says he values the opportunities MIT has given him to put his two passions together.

“I’m super happy to be incorporating computer science and music in a way that can help society develop a deeper understanding,” he says. “I have a deep appreciation for art and culture and making.”

"People have been working really hard to make the new biomaking space an exciting space that involves the wide scope of bioengineering projects,” says Nora Enright, who is making images using bacteria that respond to light.

“I think having opportunities to try out these different skills and build projects in a way that other engineering disciplines can do is really exciting."

Enright, who majored in biological engineering, believes the experience she is gaining will also help her achieve her ambition of running her own lab someday.

"Getting to talk to people who have these amazing ideas and all this passion for what they do and getting to be a part of it is just great."

Almost every day this summer, Weixun He practically lived at ProtoWorks, a makerspace at the Martin Trust Center for MIT Entrepreneurship. “Making is very powerful. You learn all these theoretical concepts that are useful, but until you make something, there is so much you don’t know,” he says, noting that in addition to machines, the makerspace provides mentorship and a supportive community.

This support has proved invaluable as He works with a startup to develop robotic bartenders— “to make the office more social.” He’s team fabricated its whole working prototype at ProtoWorks. “This room represents the bridge between the physical world and your idea,” says He, who majored in mechanical engineering.

“I discovered through makerspaces and a lot of the hands-on classes I took freshman year that I really liked making things,” says Sabrina Hare, a mechanical engineering major who is making the map as a reminder of her hometown.

“I really like The Deep because it gives you access to intense machinery you aren’t able to access in other shops, like laser cutters, mills, and lathes. There aren’t as many barriers to cross before being able to use them. You go through a general orientation and a specific-machine training and then you can get going.”

Physics PhD candidate Bobby Johnston is making the Death Star machine as a gift. “My sister and her husband just got married and I wanted to get them an awesome gift, but being a graduate student I don’t have a ton of money to throw around, so I figured I would just build something myself,” he says.

“I’m pretty psyched with how it has come out.” He says working in the MIT Hobby Shop is “incredible.” “Most people are only here because they want to be, so everyone is in a really good, helpful spirit. I am happy I found this place.” 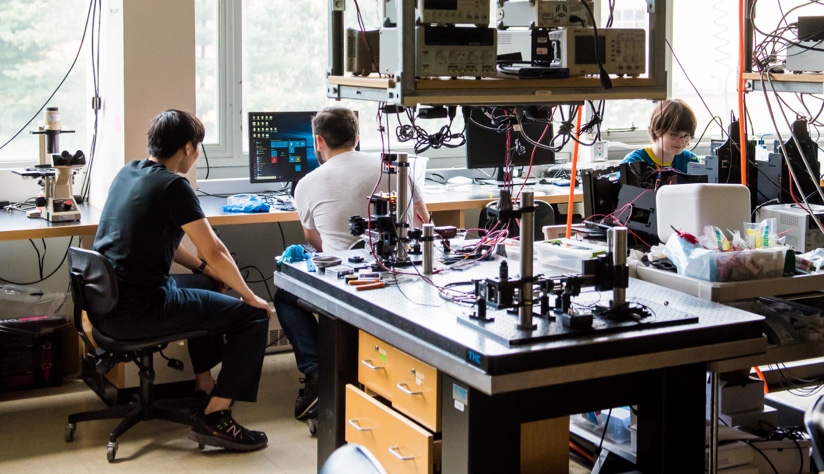